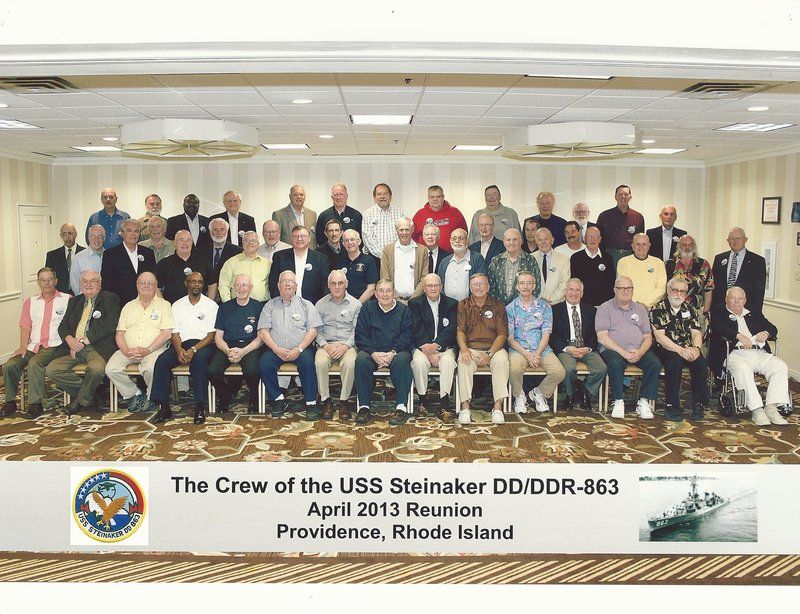 Representing Algert Wallace who served onboard the STEINAKER in 1946 - 1947 was his Son Mark Wallace and Grandson Vince Wallace.  Vince Wallace spoke about his grandfather's service and stories of the past.

Chairman, John Evans presented information on the National Naval Aviation Museum, Pensacola, Florida for the group tour.  Shipmates agreed and asked the Chairman to make final arrangements for the tour.

Discussion was held concerning making donations.  Al Tondora presented information on the Wounded Warrior Program and asked that this program be considered for a donation.  Chairman, John Evans spoke of making a donation to an organization that awarded scholarships to military families.  A motion was made by Kenneth Kohnen to make a $700.00 donation to the Tin Can Sailor's Association and a $100.00 donation to the Wounded Warrior Program.  This was approved.

Discussion was held about the Saturday night auction and this year the committee would also be holding a silent auction.

Introductions and acknowledgements by STEINAKER shipmates.

Shipmates were informed that immediately after the business meeting Shipmate Chris Mathiesen would be presenting a power-point
presentation of this Naval Service and RITOA career.  After Chris's presentation, Shipmate John Ives would be showing a video of the USS STEINAKER 1968 WESPAC Deployment to Vietnam.

There being no further business the 2013 Annual Meeting of the USS STEINAKER Reunion Association adjourned until 2014.

The reunion for 2013 began inauspiciously enough with the early birds straggling in one by one or as couples. Ironically, my first reaction as I neared the registration table was one of astonishment that Al Tondora had grown about 12 inches since I saw him last! It was only after I got really close that I realized that this was not Al but some new attendee. Turns out it was Dave Miller from Maine! Those two could be brothers.
Our hospitality room was all prepared and ready for the festivities. Shipmates wandered in over the course of the afternoon and we soon had achieved critical mass. The getting reacquainted continued until small groups wandered off for dinner. At 1900, all were in attendance at the complimentary welcome reception provided by the Sheraton. Good hors d’oeuvres and plenty of adult beverages made for a quite entertaining start to the weekend.
Shipmates then retired to the meeting room for some entertainment provided by Russ Noble and the usual cast of characters. The surprise of the evening was the arrival of one J.C. Penney in nothing more than a towel! This was followed by a skit I have titled A Canine Night Out. Rather than bore you with a written description of this skit, you may click on the link below and view the entire scenario on Youtube. Remember, it is not over till the fat lady sings and in this case that means watching through the credits.
http://www.youtube.com/watch?v=cFenU5wIUXQ
This skit was a warm up for the rest of the weekend and anticipation was growing that this would turn out to be a great event.
Friday morning saw shipmates and families depart at 0900 on a bus tour to Battleship Cove. Located in Fall River, MA it is a large collection of US Navy vessels. The list includes the Massachusetts (BB 59), the Joseph P. Kennedy (DD 850), Lionfish (SS 298), some PT boats and the Hiddensee, an East German missile corvette. Individuals and small groups wandered at their leisure until 1130 hours when all met in the large open area inside the Massachusetts for lunch. A reasonably good buffet lunch was served and the waiting in line time was no longer than most of us could remember from our active duty days. After lunch our group reassembled at the bus to continue our tour. The next stop was the home of Lizzy Borden. I’m sure you all remember the poem.
Lizzy Borden took an axe
and gave her mother 40 whacks
and when she saw what she had done
she gave her father 41!

Another little ditty I remember is as follows:
Yesterday in old Fall River
Mr. Andrew Borden died
and they got his daughter Lizzy
on a charge of homicide
some folks say she didn’t do it
but others say she did
but they all agree that Lizzy B.
was a problem sort of kid
At any rate, it was an interesting tour through this home. Surprisingly, it is run as a privately owned Bed and Breakfast Inn and it is hard to imagine coming down for breakfast only to see poor Mr. Borden in repose on the sofa, covered in a bloody sheet. Additionally, the autopsy instruments and blood on the dining room table would add little stimulation to one’s appetite. I highly doubt that this historic site would be run quite the same way by the National Park Service.
Our tour was now at an end and we headed back to the hotel to rest for the evening ahead. Dinner was an on your own deal and most if not all made it back in time for the evening gathering.
There was still an undercurrent of apprehension pertaining to this event as it was not spelled out in the schedule given out at registration. In fact, the previous evening I had requested volunteers and the response was underwhelming to say the least. With some mild coercion and perhaps some arm twisting I was able to assemble a group which has come to be known as The Steinaker Players. I am sure this is only the start of a slew of new careers for some of the brave thespians who trod the stage that evening. At this juncture I would like to personally thank each and every one of the participants whose work made this event a success. As they say,   “let the show begin!”
Get the popcorn and drinks ready and click on the following link to Youtube:
http://www.youtube.com/watch?v=5c3LtxAxGU8
After a riotous Friday evening the business meeting came early Saturday morning. Some decisions were made concerning donations and the approval of Pensacola for 2014 and possibly Virginia Beach or Williamsburg for 2015. John Ives played a DVD of the Steinaker WestPac deployment in Viet Nam and Chris Mathiesen shared his Power Point presentation. It was heartening to hear that in attendance was a son and grandson of one of our shipmates. The granddad could not attend but wanted to stay in touch. His son and grandson also wanted to learn more about gramps experience on the Steinaker.  After the meeting adjourned, one person commented on what the Steinaker experience meant to him. This opened the gates and almost every man in the room commented on how the Steinaker/Navy experience had influenced their lives.
Agreement was almost unanimous that during our time served, we changed from boys to men. It was also encouraging to see that the cadre of officer attendees is slowly increasing. I still believe that...if we build it they will come.
Saturday evening after the traditional Two Bell Ceremony, a fine dinner was served and enjoyed by all.
This year, in order to shorten the evening a bit, we employed a silent auction for many of the contributions and it was a huge success. This left Jim Bunch and myself able to really go all out in selling the remaining items. As usual, the crew of the Steinaker is more than generous in supporting our efforts to keep these reunions going. A gracious thank you to all.
Sunday morning the breakfast buffet was excellent and fueled the attendees for the long trip home. Goodbyes were exchanged and all promised to gather again in Pensacola in 2014.

p.s.  Comments on the videos may be directed to me at: Bill@delmarpt.com.