2.Reading of order to commission the U.S.S. Steinaker.
By direction of the commandant, U.S. Navy Yard, New York.

3.Commissioning:
(a) The National Ensign is hoisted and saluted.
(b) The commission pennant and Union Jack are hoisted at the mainmast and jackstaff respectively.

Private Steinaker was born in Syracuse, New York, on 15 September 1922.He enlisted in the Marine Reserve on 20 March 1941, at Syracuse and
was promoted to Private First Class on 1 July, 1942.He saw service at the Marine Barracks, Parris Island, South Carolina, at the Marine Barracks,
Quantico, Virginia, and was attached to the First Marine Division in the field until he was killed in action on 9 October 1942.

The Presidential Unit Citation is as follows:
“The officers and enlisted men of the First Marine Division, Reinforced, on August 7 to 9, 1942, demonstrated outstanding gallantry and determination in successfully executing forced landing assaults against a number of strongly defended Japanese positions on Tulagi, Catuvu, Tanambogo, Florida and Guadalcanal, British Solomon Islands, completely routing all the enemy forces and seizing a most valuable base and airfield within the enemy zone of operations in the South Pacific Ocean. From the above period until 9 December 1942, this Reinforced Division not only held their important strategic positions despite determined and repeated Japanese navel, air and land attacks, but by a series of offensive operations against strong enemy resistance drove the Japanese from the proximity of the airfield and inflicted great losses on them
by land and air attacks.The courage and determination displayed on these operations were of an inspiring order.”
The Navy Cross was awarded with the following citation:
“For extraordinary heroism while serving with a Marine Battalion in action against enemy Japanese forces on Guadalcanal, Solomon Islands, on October 8-9, 1942.When his battalion moved into a defensive position along the Natanikau River, Private First Class Donald Baur Steinaker and other members of his platoon bore the brunt of the heavy enemy assault against their hastily prepared positions.Approximately 150 Japanese, stealing through the dense jungle growth under cover of smoke, fiercely attacked the small group of marines with automatic weapons, hand grenades, and bayonets.Fighting desperately in hand-to-hand combat against the overwhelming hostile forces, Private First Class Steinaker refused to be dislodged from his position and after exacting a tremendous toll of the enemy, heroically died at his post.His indomitable fighting spirit and unyielding devotion to duty was in keeping with the highest traditions of the United States Naval Service.Private First Class Steinaker gallantly gave his life for his country.

*
The ship will be open for inspection from after commissioning to 2:00 P.M.

*
Bus transportation will be continuously available for guests between the Washington Avenue Gate and the ship. 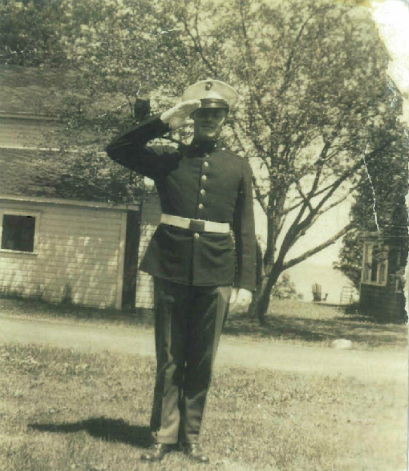 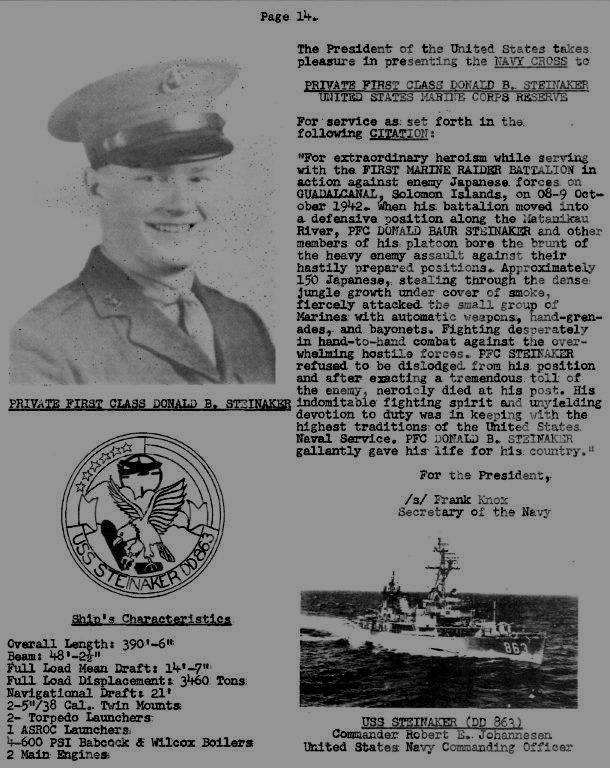 added July 2011 submitted by: David Odishoo 55-59
The USS Steinaker is a FRAM I Gearing (DD-710) Class destroyer. In 1952 STEINAKER was decommissioned and entered the yards for conversion to a USS EUGENE GREENE (DDR-711) Class Radar Picket Destroyer.  When recommissioned in 1953, she was fitted with the latest early warning radar for use in long range detection of enemy aircraft.  STEINAKER was again converted in 1964 under the Fleet Rehabilitation and Modernization (FRAM) Program.  As a FRAM Mark I destroyer STEINAKER carried highly sophisticated and modern anti-submarine
weapons and detection epuipment.  This capability, combined with modern radar and five inch gun mounts, rendered STEINAKER as one of the most versatile ships in the United States Fleet. Prior to conversion, STEINAKER was attached to Destroyer Squadron TWENTY-SIX , for which she served as Flagship in 1959, 1961, and 1962.  In 1962 she was awarded the Destroyer Squadron TWENTY-SIX Battle Efficiency "E".  Upon completion of the FRAM I conversion, STEINAKER joined Destroyer Squadron TWO in Norfolk on 24 April 1965 and a monthy later celebrated her 20th anniversary during refresher training at Guantanamo Bay, Cuba.
During 15 Mediterranean deployments, STEINAKER had numerous operations with NATO and the SIXTH Fleet Forces and in 1967 served two
months in the RED Sea and Indian Ocean as a unit of the Middle East Force. STEINAKER had shown the American Flag in ports from Northern Europe to India.
The Cold War period saw STEINAKER participate in a myriad of operations.  In July and August 1958, STEINAKER operated with the SIXTH Fleet in support of the U.S. Marine landings in Lebanon.  She was attached to the Project Mercury Space Program during April 1961 for a training mission and was called upon to participate in the Cuban Crisis Quarantine in October and November of 1962.  In October and November of 1967, STEINAKER participated in a classified operation under the operational control of Commander Submarine Force, U.S. Atlantic Fleet. A three week training cruise in early 1968 was used to sharpen STEINAKER's operational capability prior to her March Pacific deployment.
In company with the other three ships of Destroyer Division TWENTY-ONE, STEINAKER departed from Norfolk on 26 March for the 13,000
mile journey to the south China Sea.  The action she would see while operating off the coast of Viet Nam would be the first combat seen by this destroyer since her commissioning in 1945.
While supporting the 3rd Battalion, 506th Infantry, 101st Airborne Division and ARVN Regional Forces in the execution of Operation McLain, an allied thrust against Viet Ciong infiltration in South Viet Nam, STEINAKER's gunfire continually preceded friendly force movement and
minimized enemy troop build-up and concentration.  Her accurate fire power was continually provided to forces ashore and was used without hesitation in the close support of friendly troops.
On 1 November 1969, STEINAKER became a unit of Destroyer Squadron 22, homeported in Norfolk, Virginia. From January to July of 1970, STEINAKER participated in a deployment to the North Atlantic area, the initial stages of which were spent as the United States representative in the Standing Naval Force, Atlantic and multinational NATO destyroyer squadron.
On 29 January 1971, STEINAKER departed Norfolk for an extended deployment to the Mediterranean area.  Following two weeks of special Fleet and unit traninig exercises in the Caribbean area, STEINAKER joined the Sixth Fleet in late February and operated in the Mediterranean area until July.  During that period, STEINAKER participated in many fleet and multi-nation exercises and also took part in a memorable Black
Sea cruise in April with three other ships of Destroyer Squadron 22.  STEINAKER returned to Norfolk on 23 July 1971 for leave and upkeep and assignment to operations in the Western Atlantic. It was transferred to the Naval Reserve Force.
On February 24, 1982, at 2 p.m.. A ceremony began, under overcast skies as a cold wind cut across Narragansett Bay, to transfer the USS
Steinaker to a foreign government after 37 years of service.  Commander Richard E. Seaman of the Steinaker (DD-863) and Commander Edwin P. Nicholson of the Vogelgesang (DD-862) welcomed  Admiral Harry D. Train II, and the ranking Mexican, Admiral Miguel Gomez Ortega, General Commander of the Mexican Navy. The ceremony was unique in its tradition and occurrence--the simultaneous decommissioning and transfer of sister ships to a foreign government.   Also present was Werner Steinaker of Watertown, N.Y., brother of PFC Steinaker. Following the decommissioning of the Steinaker, the ceremony was in the hands of the Mexicans.  The orders to "Set the watch" and "Man the ships" were given and the Mexican sailors relieved the watches on both ships and the new crews boarded their ships.  The Mexican colors were raised and
the USS Vogelgesang and the USS Steinaker passed into U.S. naval history. They were now the Mexican Navy destroyers Quetzalcoatl and
Netzahualcoyotl.  The Netzahualcoyotl (USS Steinaker) is still operational!